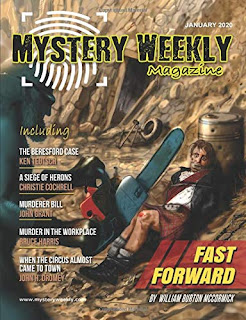 SMFS list member William Burton McCormick’s short story, “Fast Forward” appears in the Mystery Weekly Magazine: January 2020 issue. The read is available from the publisher  and at Amazon in both print and digital formats and other vendors.

The stories we feature in our monthly issues span every imaginable subgenre, including cozy, police procedural, noir, whodunit, supernatural, hardboiled, humor, and historical mysteries. Evocative writing and a compelling story are the only certainty.
Get ready to be surprised, challenged, and entertained--whether you enjoy the style of the Golden Age of mystery (e.g., Agatha Christie, Arthur Conan Doyle), the glorious pulp digests of the early twentieth century (e.g., Dashiell Hammett, Raymond Chandler), or contemporary masters of mystery.

“Fast Forward” by William Burton Mccormick: Mr. Gothe has rival split personalities. The first, "Jimmy" is a nondescript event planner. The second, "James" is a genius detective. Jimmy hates James. James loathes Jimmy. But which persona will solve the mystery of the murdered art thief?
“A Siege Of Herons” by Christie Cochrell: A well-known Mallorcan artist with a remote family tie to Cezanne goes missing, and Inspector Tomás Vilalta traces her to the Medieval walled town of Alcúdia.
“Murderer Bill” by John Grant: When Denny was small, his mom told him about Murderer Bill, the man who seeks out kids who've been bad. Now he's grown up, Denny sometimes wants to be bad, but the thought of Murderer Bill keeps him in check. Then Tabitha walks into his life ...
“The Beresford Case” by Ken Teutsch: A psychic detective who is not as he seems, a damsel in distress who is not as she seems and an English manor which is not as it seems.
“When The Circus Almost Came To Town” by John H. Dromey: It’s no laughing matter when a boomtown is overrun by clowns. Or is it?
“Murder In The Workplace” by Bruce Harris: An office supply company security director investigates the murder of a sales manager. Four salespeople had motive and opportunity.
Posted by Kevin R. Tipple at 2:15 PM
Email ThisBlogThis!Share to TwitterShare to FacebookShare to Pinterest
Labels: January 2020, Mystery Weekly Magazine: January 2019, publishing news, SHORT STORIES, SMFS, SMFS Member, SMFS Member Publishing News