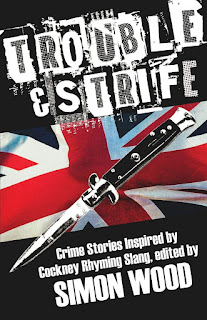 SMFS list member Travis Richardson’s short story, “Lee Marvin” appears in the recently released anthology, Trouble & Strife: Crime Stories Inspired by Cockney Rhyming Slang. Edited by Simon Wood, the read is published by Down & Out Books. The read is available in both eBook and print format from the publisher, Amazon, and other vendors.

Welcome to the world of Cockney rhyming slang, where what is said means something completely different than how it sounds. Originally, it was a coded language created by criminals for deceiving undercover police officers during Victorian times. Common phrases like septic tank, holy water, brown bread, tomfoolery and mince pies don’t mean what you think they mean. Others, like Barnaby Rudge, gypsy’s kiss, smash and grab, butcher’s hook, kick and prance and bubble and squeak paint a picture. There are stories to be written about these phrases and in Trouble & Strife, the coded and colorful phrases of Cockney rhyming slang became the inspiration for eleven killer crimes stories from writers on both sides of the pond. A few choice words include: Babbling Brook is a talkative inmate at the state penitentiary. A hairdresser has to pay his dues for a crime that took place at Barnet Fair. And you never want to meet a Lady from Bristol. You don’t have to understand rhyming slang to enjoy this book. You just have to enjoy a damn good story. To see what the authors have come up with you'll have to turn the page and have a butcher’s. Edited by Simon Wood with stories by Steve Brewer, Susanna Calkins, Colin Campbell, Angel Luis Colón, Robert Dugoni, Paul Finch, Catriona McPherson, Travis Richardson, Johnny Shaw, Jay Stringer, and Sam Wiebe. 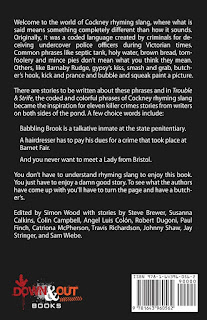