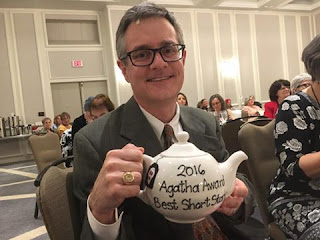 You can read his winning story on his website here.

In addition to Art Taylor, three other SMFS members were up for the "Best Short Story" Agatha Award. Those nominees were Barb Goffman, Edith Maxwell  and B. K.  Stevens.

Established in 1989, Malice Domestic™ is an annual fan convention in the metropolitan Washington D.C. area that celebrates the traditional mystery, best typified by the works of Agatha Christie, containing no explicit sex, excessive gore, or violence. The 2016 Agatha Awards were given for materials first published in the United States by a living author during the calendar year 2016 (January 1-December 31), either in hardcover, as a paperback original, or e-published by an e-publishing firm.

John Floyd, “Sand Hill,” in Gathering Storm Magazine, Volume 1, Issue 2: Collected Tales of the Dark, the Light, and Everything in Between (April 2017) and “Doctor in the House,” in Flash Bang Mysteries: Spring 2017.  Also out this month is his short story “The Red-Eye to Boston,” Horror Library, Vol. 6, Cutting Block Books (April 2017).

LD Masterson, “Annie Get Your Gun” in the anthology Busted! Arresting Stories from the Beat, Level Best Books (April 2017).

Alison McMahan, "The New Score" in Fish Out of Water: A Guppy Anthology, Wildside Press (March, 2017) and "The Drive By" in the anthology Busted! Arresting Stories from the Beat, Level Best Books (April 2017).

Final Day of Voting for the 2017 Derringer Nominees

Eligible SMFS members have been voting during the month of April. As set by the Derringer Coordinator, Dan Persinger, voting ends at 11:59 pm, EDT,  tonight. Dan will verify the votes on Sunday and prepare the winner announcement. Winner announcement comes Monday. 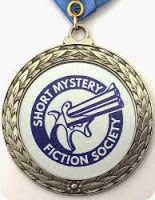 Update: As posted to the SMFS list from Derringer Coordinator Dan Persinger at 11:18 AM today:

"You can still cast your votes in this year's Derringers until 11:59PM ET tonight.

I will count, recount, and record the results tomorrow, and I will report the results to the membership by 8:00AM ET Monday morning. Those results will be official."

SMFS salutes author Lawrence Block on his win of the Edgar Award for Best Short Story. He won for his tale, "Autumn at the Automat" in the anthology In Sunlight or In Shadow.

The full list of the 2017 Edgar Award Winners can be found at at the MWA website.
Posted by Kevin R. Tipple at 10:00 AM No comments:
Email ThisBlogThis!Share to TwitterShare to FacebookShare to Pinterest
Labels: 2017 edgar award winner, lawrence block, mwa, mystery writer's of america, SHORT STORIES

Slow Beginnings and Lines of Action by Art Taylor

Guest Post: (SOME) OF MY WRITING SECRETS by Jan Christensen

For this last Monday in April, we have a special guest post from our former President, Jan Christensen. This is the first of what will be quite a number of informative posts from Jan about writing and tips she has come up with over the years.

(SOME) OF MY WRITING SECRETS by Jan Christensen

I write "by the seat of my pants." If I outline, which I dislike doing in the first place, I lose interest in writing the story--it's like reading a book for the second time immediately after you just read it for the first time. 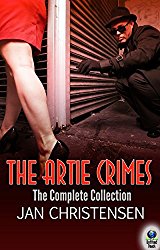 But I've found out after writing several novels and lots of short stories, that there are some tricks that can help me with both character AND plot.

So, what I do now is think of several characters and start writing. After a while, I probably know what they do for a living, what they look like and some tiny bit about their personalities.

Each character also needs to be motivated by something. And then I have the fun of putting obstacles in her way to creative tension and conflict there, too.

So, two important ways to help yourself have interesting characters your readers will care about is to give each one (even many of the minor characters) a secret or two, and something they want badly.  It could be that what they want badly is to hide their secret.

It's up to you when to divulge the secrets. Often it's best to wait a while to do that, but other times it's good for the reader to know almost right away because it explains why the character acts as she does. And it's always delicious, isn't it, to be in on other people's secrets?

SleuthSayers: The Little Engine That Couldn't: Writers and Self-Doubt

SleuthSayers: The Little Engine That Couldn't: Writers and Self-...: by John M. Floyd Confidence is a wonderful, magical thing, when applied to creative endeavors. It can sustain us in good times and bad,...
Posted by Kevin R. Tipple at 8:55 AM No comments:
Email ThisBlogThis!Share to TwitterShare to FacebookShare to Pinterest
Labels: John M. Floyd, self doubt, SHORT STORIES, SleuthSayers Blog, writing, writing advice

Congratulations to all the selected authors.

Established in 1989, Malice Domestic™ is an annual fan convention in the metropolitan Washington D.C. area that celebrates the traditional mystery, best typified by the works of Agatha Christie, containing no explicit sex, excessive gore, or violence.

Malice Domestic 29 (April 28- 30) sees four SMFS members up for the Agatha Award for Best Short Story. Those member nominees are:

“The Mayor and the Midwife” by Edith Maxwell in Blood on the Bayou: Bouchercon Anthology 2016 (Down & Out Books)

Member Jay Hartman, editor of our 2015 first SMFS-member anthology, Flash and Bang, has confirmed that bookseller Mystery Loves Company will have copies for sale at the convention. Members with stories in the anthology are strongly encouraged to go by and sign the sale copies as well as spread the word that the anthology is present for sale.

Member Terrie Farley Moran also has set up a get together during the convention for SMFS attendees and family/friends. The location this year is the Bar of the Daily Grill (a restaurant in the hotel) at 5:30 on Friday, April 28, 2017.
Posted by Kevin R. Tipple at 3:30 PM 1 comment:
Email ThisBlogThis!Share to TwitterShare to FacebookShare to Pinterest
Labels: Agatha Awards, ANTHOLOGIES, April 2017, Malice Domestic, Malice Domestic 29, SHORT STORIES, SMFS

Little Big Crimes Review: Just Like In The Movies by Kate Thornton

As posted to the SMFS list by Derringer Coordinator Dan Persinger, these are the finalists for 2017. Eligible SMFS members vote April 1-29, 2017. Winners will be announced on May 1, 2017.

The Way They Do It in Boston by Linda Barnes (Ellery Queen's Mystery Magazine, September/October 2016)

The Woman in the Briefcase by Joseph D'Agnese (Ellery Queen's Mystery Magazine, March/April 2016)

"The Chemistry of Heroes" by Catherine Dilts (Alfred Hitchcock's Mystery Magazine, May 2016)