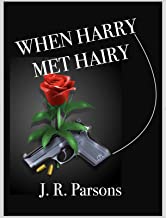 SMFS list member J. R. Parsons has published the short story, When Harry Met Hairy, in print and eBook formats. The read is available at Amazon. The eBook version is free for today and tomorrow (Wednesday, 8/10).

Two assassins meet cute on the dark web. Will they die ugly in person? 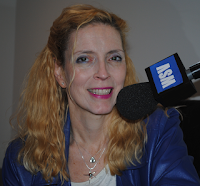 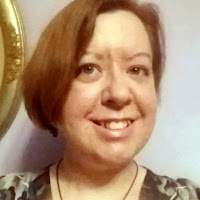 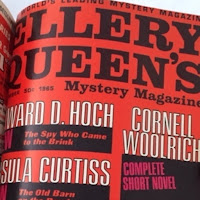 Our fiction podcast this month is a classic by author William Brittain, who wrote for EQMM from 1964 to 1983. It’s read by EQMM author and translator Josh Pachter, who has edited three collections of William Brittain’s stories. Here is “The Man Who Read John Dickson Carr,” from the December 1965 issue of EQMM. It was the first in a series of stories, all published in EQMM, whose titles begin “The Man Who."

Something Is Going To Happen: Hiding in Plain Sight (by Anne Swardson)

Something Is Going To Happen: Hiding in Plain Sight (by Anne Swardson)

Judy Penz Sheluk: Behind the Scenes: A Sense of Discovery by Victoria Weisfeld

Judy Penz Sheluk: Behind the Scenes: A Sense of Discovery by Victoria Weisfeld

SleuthSayers: To Protect the Innocent, and Other Reasons by Robert Lopresti

SleuthSayers: To Protect the Innocent, and Other Reasons: About a decade ago at a mystery conference a friend told me about an anthology he had been invited to write a story for.  Hmm, thought I.  ...
Posted by Kevin R. Tipple at 10:08 AM No comments:
Email ThisBlogThis!Share to TwitterShare to FacebookShare to Pinterest
Labels: robert lopresti, short story, SleuthSayers, SMFS, SMFS Member, The Book of Extraordinary Femme Fatale Stories, To Protect the Innocent and Other Reasons, writing 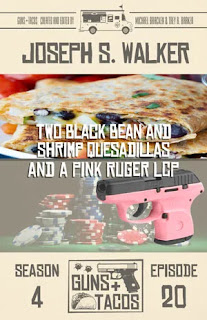 Today is publication day for Two Black Bean and Shrimp Quesadillas and a Pink Ruger LCP by Joseph S. Walker. This is the latest installment of Season Four of the Guns + Tacos series edited by Trey R. Barker and SMFS list member Michael Bracken. Published by Down and Out Books, the read is available at the publisher, Amazon, and elsewhere.

Alvin Bleeker has a ratty apartment, a rusted-out car, and a dead-end job, managing a big-box store barely clinging to life. He also has a compulsive gambling habit that’s put him tens of thousands of dollars in the hole to Lamar, the bookie and loan shark rarely seen without his brutal enforcer, Jimmy. Alvin can’t bring himself to worry too much about his debts, though. He’s just marking time, waiting for his rich Aunt Elaine to kick off and leave her only living relative with a fortune that will end all his problems forever.

Unfortunately, Aunt Elaine has other plans, leaving Alvin out of her will almost entirely. Even worse, Lamar knows it. He extorts Alvin into Plan B: stealing a priceless Picasso sketch from Aunt Elaine’s North Shore mansion. Naturally, Jimmy will come along for the ride. So will Brittany Orozco, who has the face of a cheerleader, the heart of a killer, and the sharpened icepick of a sociopath. Behind Brittany is Lamar’s boss, the shadowy mob chieftain who doesn’t care how many bodies have to drop if he can add the sketch to his collection.

Alvin is in way over his head, but it should be a simple enough job, in and out in ten minutes. He’s just playing it safe when he goes to the taco truck to buy some insurance, in the form of the first gun he’s ever owned—a gun which, to his dismay, turns out to be pink. He’s betting he won’t really need it. 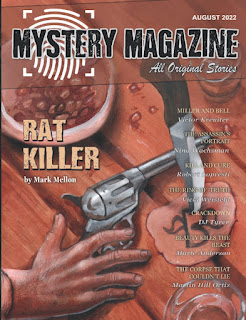 Several SMFS members are published in the recently released Mystery Magazine: August 2022. The read is available in print and digital formats from Amazon. The members in the issue are:

Robert Lopresti with “Kill And Cure.”

Martin Hill Ortiz with “The Corpse That Couldn’t Lie.” This piece is “A You-Solve-It” and the answer will run in the September issue.

Nina Wachsman with “The Assassin's Portrait.”

Vicki Weisfeld with “The Ring Of Truth.”

The stories we feature in our monthly issues span every imaginable subgenre, including cozy, police procedural, noir, whodunit, supernatural, hardboiled, humor, and historical mysteries. Evocative writing and a compelling story are the only certainty.

Get ready to be surprised, challenged, and entertained--whether you enjoy the style of the Golden Age of mystery (e.g., Agatha Christie, Arthur Conan Doyle), the glorious pulp digests of the early twentieth century (e.g., Dashiell Hammett, Raymond Chandler), or contemporary masters of mystery.

✓ In our cover story, “Rat Killer” by Mark Mellon, the Ortega brothers got far more than they bargained for when a Seminole cowboy came to the tiny Mexican hamlet of Matalo, claiming he wanted to buy cattle.

✓ “Miller And Bell” by Victor Kreuiter: Dutch Miller's, tired of his life as a for-hire felon and retired in a small town on the Missouri/Iowa border, makes a simple mistake that sets in motion his undoing.

✓ In “The Assassin's Portrait” by Nina Wachsman, a Victorian woman artist is commissioned to paint the portrait of an up-and-coming Member of Parliament by his colleagues. Unknown to her subjects, the artist is not only a talented portraitist but a uniquely successful assassin.

✓ In “Kill And Cure” by Robert Lopresti, a hitman has only one chance to get into a medical study that might save his life: solve the murder of the son of the doctor in charge.

✓ In “The Ring Of Truth” by Vicki Weisfeld, West Texas reporter Brianna Yamato investigates the death of a high school thespian. The dead girl seemed ordinary, but the drama in her real life was greater than anything on stage.

✓ “Crackdown” by DJ Tyrer: The richest man in the city is dead in mysterious circumstances and dead crooks are buying up real estate—and somebody doesn't want anyone digging into why.

✓ In “Beauty Kills The Beast” by Marie Anderson, a beautiful young trophy wife uses poison to choose between wealth and love.

✓ In “The Corpse That Couldn’t Lie,” A You-Solve-It By Martin Hill Ortiz, Dr. Jacobs is found stabbed to death in his library. Inspector Dunsworthy must determine which of three suspects did the deed.

SleuthSayers: What I Didn't Know Then (Pretty Much Everything) by Steve Liskow 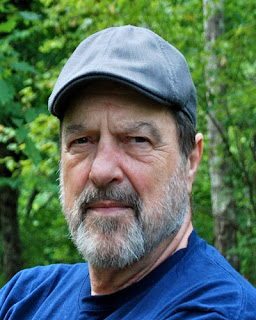 Please welcome SMFS list member Paul A. Barra to the blog today with his perspective on an interesting topic…

Northern bias in NYC publishing by Paul A. Barra

I finished a middle grade novel early in the new year featuring four eleven-year-old Charlestonians who lived in April 1861. When the smoke clears over the Battery and they realize not a single Union soldier was killed in the CSA bombardment of Ft. Sumter, they decide there must have been a Yankee spy who warned the fort of the imminent attack. The rest of the story is about their adventures trying to identify the spy. The action all occurs before the War Between the States begins in earnest, so there is little blood and gore. One of the four is the son of a slave—excuse me: an enslaved person—and another the daughter of a prominent Catholic family, so there is some drama and tension over both slavery and nativism among the children.

My agent sent the manuscript to a Sensitivity Reader (now misnamed an Authenticity Reader) while we were editing it. I discovered that historical accuracy is less important in publishing today than are the sensibilities of modern-day readers, or should I say editors? If some people were called Negroes by polite southerners then, they must be called African Americans now; if they were colored people then, they must be people of color now; if they were Papists then, they must be Catholics now. A Black person, capitalized b only, can never be called boy, even if he is an eleven-year-old male, and even if rural southern folk tend to call male children boys. It did not matter if the historic terms I used were in narration or dialogue. They had to go.

I caved, of course—I want the script published—only to discover that some editors are reluctant to publish stories from a Confederate perspective no matter how sensitive the verbiage. Children who uncover a spy for the North and are hailed by Gen. P.G.T Beauregard as heroes cannot be. Maybe the protagonist himself could turn out to be the Yankee spy? He'd then become a genuine hero, a hero the upper half of the nation can admire, even if he's a traitor to his own community. One editor had the effrontery to suggest that actual scenario to my agent.

The publishing industry is beset with serious problems these days, and my complaint is as a zit on the forehead of a man infected with Monkey Pox, but I think it does relate to at least one of those problems: sales. Editors buy what they like; their readers do not necessarily like the same books. Ten-year-old boys and girls do not work and play on Manhattan's Sixth Avenue, nor do they read the New York Times. They would like to learn a little something as they are entertained by adventure novels. They don't keep up with the current fads in language that seem to preoccupy the lives of editors, and that is not what they want to learn. If they read an historical novel, they expect to learn true history.

I am grateful for at least two things that came out of my altercations with traditional NY publishers:

1. middle grade readers are apparently too young to be concerned yet with the rather abrupt change to gender-inclusive language that's battering the East Coast, since no one to date has requested from me a plural pronoun joined to a singular verb form;

2. I left "Papist" in my novel and have yet to receive a complaint about it. I guess Catholics have not been victimized by the language of the past as much as I thought.

Paul A. Barra's latest novel, WESTFARROW ISLAND, was a Silver Falchion finalist, and since one of his short stories was selected for the MWA's WHEN A STRANGER COMES TO TOWN anthology, which is in the running for an Anthony, he claims a portion of that glory road for himself also.