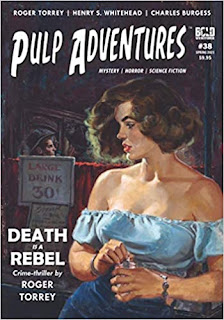 SMFS member David Goudsward has an article in the recently published, Pulp Adventures #38. His piece is titled “Dr. Whitehead & The Naked Secretary.” Published by Bold Ventures Press, the read is currently is available in both print and eBook formats at the publisher and at Amazon.

1936: YEAR OF PULP UPHEAVAL by Will Murray — The Hero Pulp genre was at its peak, and a tipping point, in 1936; DR. WHITEHEAD & THE NAKED SECRETARY byDavid Goudsward — An author of Weird Tales faced the horror of typing his own manuscripts when his secretary became Miss Florida 1931

DEATH IS A REBEL by Roger Torrey — Murder was occurring in Florida, right under Detective Mahoney’s snoot — exceptionally baffling murder that speedily developed angles rough and tough, plus painful international aspects of continent-shaking revolution; THE FIREPLACE by Henry S. Whitehead — Angry embers burned many years after the fact.

ROOM 801 by Jack Halliday — Just another date for some, but August 5 signified revenge and redemption for other people; TUNNELS OF LAO FANG by James Palmer — An unspeakable horror dwelled among the stalactites; TAKING THE PLUNGE byPaulene Turner — The world’s high-rolling cockroaches look forward to a long, hot night of partying, unless special agent “Valentina” stops them; FROM HERE TO SHEBOYGAN by Charles Burgess — A one-way trip to hell, with Murder as the back-seat driver; ALL IN HER HEAD by Bruce Beattie — Want to take a mindtrip? No drugs involved,” read the classified. What could go wrong, Joshua decided.