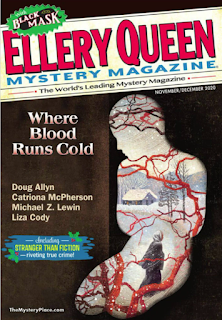 SMFS list members are published in the Ellery Queen Mystery Magazine: November/December 2020 issue. The issue is available at the publisher, Amazon, and other vendors. The SMFS members in the issue are:

Maurissa Guibord with “A Voice from the Dark.”

Josh Pachter with “The Adventure of the Black-and-Blue Carbuncle.”

Close out the year with EQMM’s charmingly chilling holiday issue. In our pages you’ll follow clues through the snow in “Killer Instinct” by Doug Allyn, solve a compelling Christmas Eve puzzle by firelight in Catriona McPherson’s “Mrs. Tilling’s Match,” travel through time to the holidays at a coal mine in Almuth Heuner’s Glauser Award-winning “Black Legacy,” and enjoy a Yuletide visit with Ellery Queen and the Puzzle Club in “The Adventure of the Black-and-Blue Carbuncle” by Josh Pachter.

The holidays are known as a family time, and characters navigate those ties in “My People” by Liza Cody, featuring an undercover police officer, “Good Decisions” by Edwin Hill, in which two couples navigate their desires, “The Cards You’re Dealt” by Michael Z. Lewin, featuring Sergeant LeRoy Powder, and “The Man at the Window,” a Slater and Lomond case by Pat Black. Much like unwrapping a gift, characters sometimes give more than you’d expect, such as those in “The Man From Scotland Yard Dances Salsa” by John Lantigua, a Willie Cuesta mystery, “Crumble” by Christine Poulson, set in a small English town, and “The Other Imelda” by R.T. Raichev, featuring always reluctant sleuth Antonia Darcy and her husband Major Payne.

Two entires from our Black Mask department shine like coal in a stocking: “Duel of the Aces” by Travis Kennedy and “Boomerang Dice,” a classic reprint by Stewart Stirling. Meanwhile, power dynamics shift uneasily in “The Winner” by LaToya Jovena, “Maps” by Kim Harbridge, and “The Tuesday Curse” by Bill Pronzini and Barry N. Malzberg.

As you read “The Line” by Cath Staincliffe, “Words Don’t Kill” by Jehane Sharah, and “A Voice From the Dark” by Maurissa Guibord, you might find yourself reflecting on your year’s deeds (or misdeeds). Finally, we invite you to consider the stories published in EQMM this year and fill out our Readers Award ballot!