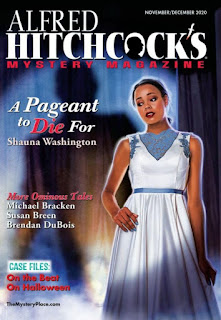 SMFS list members are published in the Alfred Hitchcock’s Mystery Magazine: November/December 2020 issue. The issue is available at the publisher,  Amazon, and other vendors. The SMFS members in the issue are:

Barb Goffman with “Eat, Drink, and Be Murdered.”

Robert Mangeot with “On Loan from the Artist.”

In these times, when even a trip to the supermarket is fraught with peril, we can pursue new experiences through the widely traveled characters of our November/December issue. Their travails transport us to far-flung places—and drop us into situations that we would perhaps rather experience on the page. Take Magistrate Ovid’s path between the underworld of ancient Alexandria and the temple of the crocodile god in Tom Carpenter’s “The Lure of the Crocodile.” Or Michael Bracken’s housewife, whose detour takes her to a life-altering concert in “Woodstock.” When a prodigal son returns, he brings with him an alluring whiff of crime in Eric Rutter’s “Raven Stole the Sun,” while a spy returns to the home office to face his past in Mark Sadler’s “At the Coal Face.” Two siblings from Mexico try to make their way in the States in Doug Levin’s “Tamales for Sale.” A Midwestern transplant to New York has a metropolitan odyssey in Meredith Anthony’s “I’m Right Here.” O’Neil De Noux takes his adroit 1940’s P.I. on an excursion in New Orleans in “Dreamboat Gambol.” And low-level mobsters take to small-town New Hampshire seeking to hide out in “A Report on the Ladies’ Playground Committee of Prescott, NH” by Brendan DuBois.

An artist’s obsession with a particular color keeps her rooted in “The Color of Murder” by Mary Angela Honerman. A senior gets caught in financial shenanigans in John C. Boland’s “Time-Sharing.” Upstate NY P.I. Maggie Dove doesn’t take someone seriously in “Crown Imperial” by Susan Breen. A local newspaper struggles to stay relevant—and afloat, in Barb Goffman’s “Eat, Drink, and Be Murdered.” Las Vegas stylist Stacy Deshay is once again on hand when murder strikes in Shauna Washington’s “A Pageant to Die For.” A bit of art inspires a loan officer to think in Robert Mangeot’s “On Loan from the Artist.” And R. T. Lawton introduces us to a new series in “A Matter of Values.”

Wherever you are at this point in time, let us whisk you away with great crime fiction.