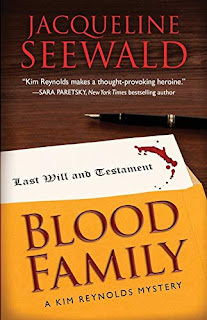 SMFS list member Jaqueline Seewald’s new book, Blood Family: A Kim Reynolds Mystery was published today by Encircle Publications. The book is her fifth mystery in the series. It is available at the publisher, Amazon, and other vendors. You can learn more about the new mystery and read a short excerpt from the first chapter at Jacqueline Seewald’s blog.

In Jacqueline Seewald’s fifth Kim Reynolds Mystery, Kim, an academic librarian, is intent on locating her biological father, James Shaw. Unfortunately after finding him, he dies unexpectedly. It is up to Kim to connect with the family she has never known. In doing so, she discovers a half-sister who is in need of her help. Kim is concerned that Claire Shaw is being exploited, and Kim wants to help her however she can. Kim then learns that Claire’s stepmother also died under mysterious circumstances, and her stepbrother disappeared. Once Kim becomes involved, she quickly realizes her own life is now in danger. With Kim’s fiancé, Lieutenant Mike Gardner, Wilson Township homicide detective, investigating along with Sergeant Bert St. Croix, the race is on to catch a killer that is now intent on adding Kim to the list of deceased.
Posted by Kevin R. Tipple at 10:18 AM