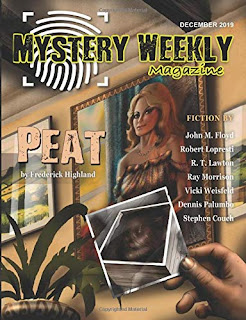 Several SMFS list members are published in the Mystery Weekly Magazine: December  2019 issue. The read is available from the publisher  and at Amazon in both print and digital formats and other vendors. The SMFS members in this issue are:

Jack Bates with “A Minute To Murder” in “A-You-Solve-It” mystery section.

At the cutting edge of crime fiction, Mystery Weekly Magazine presents original short stories by the world’s best-known and emerging mystery writers. The stories we feature in our monthly issues span every imaginable subgenre, including cozy, police procedural, noir, whodunit, supernatural, hardboiled, humor, and historical mysteries. Evocative writing and a compelling story are the only certainty. Get ready to be surprised, challenged, and entertained--whether you enjoy the style of the Golden Age of mystery (e.g., Agatha Christie, Arthur Conan Doyle), the glorious pulp digests of the early twentieth century (e.g., Dashiell Hammett, Raymond Chandler), or contemporary masters of mystery. In this issue: In our cover feature “Peat” by Frederick Highland we are taken not far from a remote section of Hadrian's Wall, where archaeologists have departed for the season leaving the innkeeper of Wycherly's On The Moor, Hans Seefeldt, anticipating some peaceful downtime. Peaceful, that is, until a local peat cutter arrives bearing unwanted gifts. “The Job Interview” by R.T. Lawton warns us when you need money, job interviews can be tricky situations. At “Rachel’s Place” by John M. Floyd, a blind woman becomes the target of bank robbers who believe she can identify them. “A Really Great Team” by Dennis Palumbo is a story filled with so many crimes—one thing leads to another … “Robot Carson” by Robert Lopresti is a mystery set in the near future where robots have replaced most cops. Mary discovers that this leads to some new problems—as well as some old ones. In “The West Texas Rookie” by Vicki Weisfeld a young Texas newspaper reporter has trouble fitting into the old boys' club in the office. When she's given the throwaway assignment of a four-victim murder, she sets out to solve the crime. In “Exposure” by Stephen Couch homeless shelter volunteers discover the frozen corpse of a city official, but find their amateur sleuthing over his demise may lead them into deadlier waters than they ever imagined. In “Taking Debbie Rabbit” by Ray Morrison a hitman's latest assignment doesn't quite add up, leading to some deadly surprises. 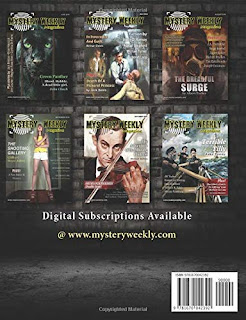