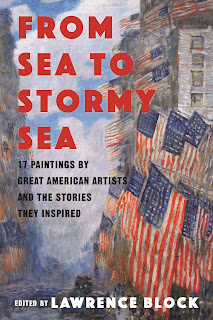 SMFS list member Gary Phillip’s short story, “A Matter of Options” prompted by the Depression-era painting “Why Not Take the L” by Reginald Marsh appears in the new anthology, From Sea to Stormy Sea: 17 Stories Inspired by Great American Paintings. Edited by Lawrence Block, the read is available in print and digital formats. Published by Pegasus Books, the read is viable from the publisher and other vendors including Amazon.