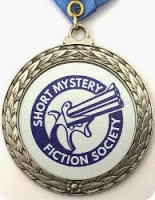 Since 1998, the Short Mystery Fiction Society has awarded the annual Derringers—after the popular pocket pistol—to outstanding published stories. The awards recognize outstanding stories published during 2018. Results of membership voting are scheduled to be posted on May 1, 2019.


A vote of the SMFS membership will determine the winner in each category. Results will be announced in May 2019.

4/5/19--- A big thank you to Gerald So who added the publishing info on each finalist.
Posted by Kevin R. Tipple at 4:24 PM
Email ThisBlogThis!Share to TwitterShare to FacebookShare to Pinterest
Labels: 2019 Derringer Award Finalists, 2019 Derringer Awards, awards, Derringers, news, SHORT STORIES, the short mystery fiction society

Contrast to all the finalists! I’m delighted to be on the list along with friends including Alan Orloff, Barb Goffman, and Gigi Pandian.