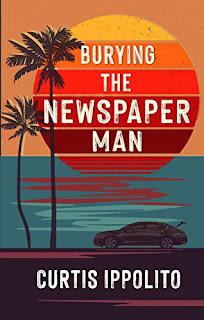 Today is publication day for Curtis Ippolito and his new book, Burying The Newspaper Man. Billed as “a gritty tale of fear and redemption” it is published by Red Dog Press in England. Currently it is available in eBook format at Amazon. You can also read an interview with Curtis about the new book at the Bristol Noir.

A dead body. A dark past. An ordinary man with everything to lose.

Marcus Kemp is a regular beat cop living a normal life in San Diego, California. Until the day he makes a shocking discovery: a dead body in the trunk of a stolen car. Worse, the victim turns out to be the man who abused him as a child.

Marcus instinctively wants to help the killer get away with murder and, disregarding his police oath, will stop at nothing to make it happen. With both his job and freedom in jeopardy, his investigation leads him to an unexpected killer, and Marcus is soon faced with an impossible decision.

Can he finally bury the past before it drags him under?