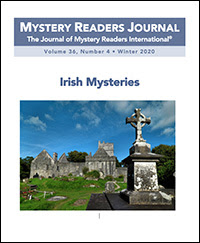 Several SMFS members are published in the recently released Mystery Readers Journal: Irish Mysteries, Volume 36, No. 4, Winter 2020. The read is available in both hardcopy or a PDF at the website. The members in this issue are:

Art Taylor with “Study Abroad Leads to a Castle Adventure.”

Andrew Welsh-Huggins with "When Irish Eyes Are Dying."

The Real Ireland by Robin Castle

Murder in the Border Country: The Crime Novels of Anthony J. Quinn by David Clark

The Ireland We Believe We Own by Rona Bell

Irish Mystery Writers of the Golden Age by Patricia Cook

The Orange and the Green by James Benn

Shadows of Guilt: Ireland in the 1950s by John Banville, aka Benjamin Black

How Ireland’s Mysteries Bedazzle the Historical Novel by Nancy Blanton

At Marks and Spencer by Flynn Berry

On Living and Writing in Ireland by Robin Castle

Kennedy, Starrett & McCusker… No, Not a Firm of Ulster Lawyers by Paul Charles

Routine Commercial Bombing, and Other Tales from Belfast by Anne Emery

Serial Killer on a Small Island by Catherine Ryan Howard

Noir in Belfast by Adrian McKinty

Bonds to Ireland Can’t Be Broken by Catie Murphy

The 74% Irish in Me by Carlene O’Connor

Study Abroad Leads to a Castle Adventure by Art Taylor

When Irish Eyes Are Dying by Andrew Welsh-Huggins

Just the Facts: The Case of the Vanishing Women by Jim Doherty

In Short: Ireland by Marvin Lachman

From the Editor’s Desk by Janet A. Rudolph