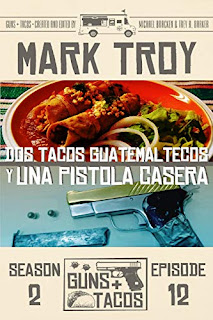 Today is publication day for Dos Tacos Guatemaltecos y Una Pistola Casera by Mark Troy. This is the concluding installment of Season Two of the Guns + Tacos series edited by Trey R. Barker and SMFS list member Michael Bracken. Published by Down & Out Books, the read is available at the publisher where there are numerous perks for subscribers, at Amazon, and elsewhere.

Getting off the bus from El Paso, Balam, the Mayan jaguar, arrives in South Chicago, hungry, broke, and cold, hoping to find MagcPanda, a girl he had befriended online. Balam believes MagcPanda has fallen prey to an online predator and has been trafficked to Chicago. His only link to her is a laptop stolen from a refugee shelter. Wandering the streets of the alien city, he is dismayed to find that Chicago is fraught with more dangers than any he had experienced in Guatemala or on the trek though the mountains and deserts of Mexico. When gangbangers take his laptop, destroying his hopes of rescuing MagicPanda, Balam is ready to admit defeat, only to get help from an unlikely source—the owner of a taco truck whose food is inedible, but whose “special” is sought after. Armed with the “special,” Balam resumes the hunt which terminates in the abandoned killing field.