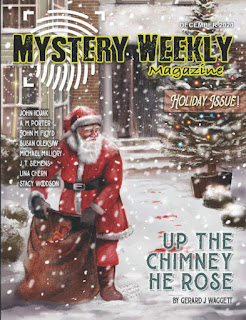 Two SMFS list members are published in Mystery Weekly Magazine: December 2020. The read is available in both print and eBook from the publisher and at Amazon. The SMFS members in this issue are:

Susan Oleksiw with “Chandler in the Classroom.”

The stories we feature in our monthly issues span every imaginable subgenre, including cozy, police procedural, noir, whodunit, supernatural, hardboiled, humor, and historical mysteries. Evocative writing and a compelling story are the only certainty.

Get ready to be surprised, challenged, and entertained--whether you enjoy the style of the Golden Age of mystery (e.g., Agatha Christie, Arthur Conan Doyle), the glorious pulp digests of the early twentieth century (e.g., Dashiell Hammett, Raymond Chandler), or contemporary masters of mystery.

In our cover story, “Up The Chimney He Rose” by Gerard J Waggett, three weeks before Christmas, Lester Manning is found bludgeoned to death inside his study, a room locked from the inside. Just because the only way out seems to have been the chimney, that doesn't make Santa Claus a suspect, does it?In “Naughty Or Nice” by Michael Mallory former teacher Roy Talman finally lands a new job, as a department store Santa Claus. But when a seven-year-old boy confesses that he murdered the girl next door, Roy is compelled to discover the truth … no matter where it leads.“Chandler In The Classroom” by Susan Oleksiw explores reaction or lack of reaction when a man with a gun bursts into a classroom.“Charlie’s War” by John M. Floyd: Military veteran Charlie Reardon, homeless and hopeless, has decided crime might be his only way out of poverty—until a mysterious stranger offers him advice. The new plan still involves a crime, but in a way that will change his life forever.In “Gina’s Greatest Hits” by Lina Chern a streetwise thirteen-year-old girl becomes a gambling debt enforcer in an attempt to keep her struggling family afloat.“The Gnomes” by A.M. Porter: When a small-town harpy returns a pair of gnomes her husband used to commit suicide in his backyard pool to their place on the lawn, pathologist's assistant Tamsin Bruce suspects murder. No one listens until it's (almost) too late.In “The Last Dance Of Don Diego” by John Kojak, a young girl witnesses a murder that could change her life, and her family's fortunes, forever. All she has to do is trust the killer.In “Chain Of Hearts” by J.T. Siemens a mild-mannered bank clerk meets his true love and gets involved in a life of crime.“Fleece Navidad” A You-Solve-It by Stacy Woodson: When a float at Pottsville’s annual Christmas parade is vandalized, it’s up to Mabel to identify the culprit and the motives behind this holiday crashing crime.