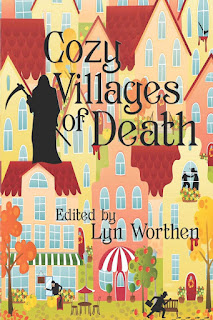 Numerous SMFS list members are published in the recently released anthology, Cozy Villages of Death. Edited by SMFS list member Lyn Worthen, who also wrote the introduction to the book, the read is published by Camden Park Press in print and eBook formats. The read is available at Amazon and other vendors. The SMFS members in the book are:

Lauryn Christopher with “Tea and Roses.”

Margaret S. Hamilton with “Dealing at the Dump.”

Ursula Hoult with “Death and Other Changed Plans.”

Clifford Royal Johns with “Death in the Lower Forty.”

D.T. Langdale with “A Clean Kill.”

Annie Reed with “Murder Runs in the Neighborhood.”

Joseph S. Walker with “"Villainy in the Vertical Village.”

Kelly Zimmer with “Crossed Off.”

Deception awaits around the next curve in the road. Rumors spread over garden hedges, fishing ponds, and knitting circles. Neighborhood cats discover a boneyard.

And when Death strolls through the tranquil countryside or checks into the quaint village inn for the weekend, it's the intrepid - and often accidental - investigators who must find and decipher clues, unravel mysteries, and bring the killer to justice. 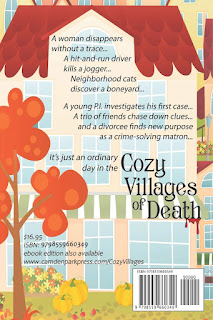