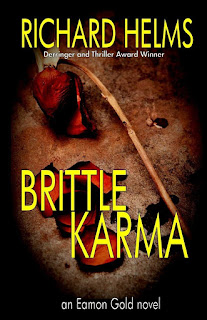 Richard Helms' Derringer Award-winning and Shamus Award-nominated San Francisco private eye Eamon Gold returns in BRITTLE KARMA, a classic tale cast in the molds forged by Raymond Chandler, Ross Macdonald, and Robert B. Parker. Eamon Gold turns away a potential client named Abner Carlisle, a recently paroled armored car robber, who is looking for a man named Eddie Rice. Rice was the wheelman for the robbery a quarter century earlier, and ran off with the take of almost twenty million dollars--and Carlisle's daughter. Gold believes Carlisle intends to murder Rice, and refuses the case. After Carlisle is murdered in his hotel room, Gold becomes intrigued when he discovers the insurance company will pay ten percent of whatever fraction of the robbery take he can recover. Gold is temporarily bucks-up, but has no paying client on the horizon, so he dives in on spec, trying to make a little quick bank on the coldest of cold cases. Along the way, he encounters crooked cops, an aging porn star, an ex-Army Ranger turned gangland muscle, the boozy estranged wife of a City Supervisor, dangerous mobsters, and a surprise player he never saw coming. 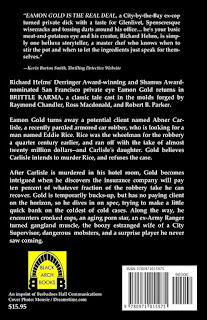