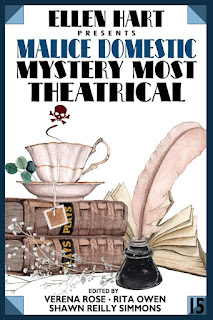 Numerous SMFS list members are published in the new anthology, Ellen Hart Presents Malice Domestic: Mystery Most Theatrical. Published by Wildside Press, this is the fifteenth anthology and is available from the publisher, Amazon, and other vendors. The members in this anthology are:

Karen Chantwell with “Mary Alice Imagines Her Life as a Movie.”

R. M. Chastleton with “The Ghost of Hamnet.”

Margaret Lucke with “This With a Kiss.”

Cheryl Marceau with “The Mask.”

Michele Bazan Reed with “The Ghost in Balcony B.”

Merrilee Robson with “Not Your Lolita.”

The Malice Domestic anthology series returns with a new take on mysteries in the Agatha Christie tradition--original tales with a theatrical bent! Included are:

The Rock Star, by Frances Aylor

The Ghost in Balcony B, by Michele Bazan Reed

Mary-Alice Imagines Her Life as a Movie, by Karen Cantwell

The Ghost of Hamnet, by R. M. Chastleton

When the Wind is Southerly, by Leone Ciporin

Death of Another Hero, by Susan Daly

The Stars Are Fire, by Phillip DePoy

The Homicidal Understudy, by Elizabeth Elwood

The Nine Deaths in Hamlet?, by A. P. Jamison

Thus With a Kiss, by Margaret Lucke

Such Tricks As These, by Jaquelyn Lyman-Thomas

The Mask, by Cheryl Marceau

The Ultimate Tie-Breaker, by Deborah Maxey

Not Your Lolita, by Merrilee Robson

A Death in Shubert Alley, by Lee Sauer

You Know How Actresses Are, by C. M. Surrisi

Deal With the Devil, by James Lincoln Warren 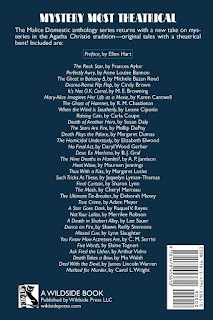