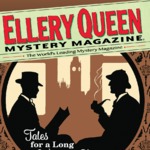 SMFS list member John Floyd reads his short story, “On the Road With Mary Jo” for the latest Ellery Queen’s Mystery Magazine podcast. Episode 133 features his tale that originally appeared in the January/February 2019 issue of EQMM. It runs slightly more than 21 minutes and can be heard for free  here.

John M. Floyd is one of the mystery genre’s most prolific short story writers. His work has appeared in more than three hundred different publications, and has earned four Derringer awards and a nomination for the Edgar Allan Poe Award for best short story. In 2018, he received the Edward D. Hoch Memorial Golden Derringer for Lifetime Achievement. His most recent honor came this year, when he won the best short story Derringer for the story he reads for this podcast, “On the Road With Mary Jo,” from the January/February 2019 issue of EQMM. www.johnmfloyd.com