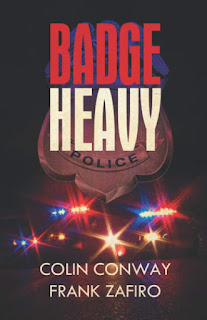 Today is publication day for SMFS list member Frank Zafiro’s new book, Badge Heavy. Co-written with Colin Conway, this is the third book in the series that began with Charlie-316. Published by Down & Out Books, the police procedural is available from the publisher, Amazon, and other vendors in a variety of formats.

When the Spokane Police Anti-Crime Team (ACT) was formed, the expectation was that its efforts would make a dent in the city’s rising crime rate. In only its first few weeks of existence, the team has done even better than hoped for, racking up arrests and seizures of guns, drugs, money, and stolen cars. Everyone from the mayor to the citizenry seems happy with ACT’s swift results.
But there are darker agendas surrounding this team. Bonds of loyalty are being forged, secret schemes made, and suspicions are focused in all directions. In the midst of run-and-gun police work, officers will discover that not everything is as it seems. Who to trust becomes a life and death question for everyone involved.
In this third installment of the Officer Tyler Garrett saga, the stakes have risen even higher. Garrett seeks to solidify his position. Officer Gary Stone undergoes a surprising metamorphosis. Captain Farrell tries to bring the situation to a head. Rookie Jun Yang struggles to find her place, while Officer Ray Zielinski must repay a debt that threatens to land him in greater danger. Meanwhile, Detective Wardell Clint continues to gnaw at the bone of the case that has consumed him for almost two years.
Something has got to give. 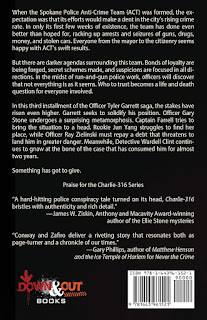