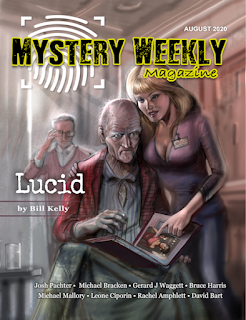 SMFS list members are published in the Mystery Weekly Magazine: August 2020 issue. The read is available from the publisher in both print and digital formats as well as at Amazon and other vendors.  The SMFS members in this issue are:

Bruce Harris with “A Numbers Game.” This is “A-You-Solve-It” mystery for this issue and the answer will be in the issue next month.

Josh Pachter with “The Odds Are Good.”

At the cutting edge of crime fiction, Mystery Weekly Magazine presents original short stories by the world’s best-known and emerging mystery writers. The stories we feature in our monthly issues span every imaginable subgenre, including cozy, police procedural, noir, whodunit, supernatural, hardboiled, humor, and historical mysteries. Evocative writing and a compelling story are the only certainty. Get ready to be surprised, challenged, and entertained--whether you enjoy the style of the Golden Age of mystery (e.g., Agatha Christie, Arthur Conan Doyle), the glorious pulp digests of the early twentieth century (e.g., Dashiell Hammett, Raymond Chandler), or contemporary masters of mystery. Our cover feature, “Lucid” by Bill Kelly, is a femme fatale tale dealing with mystery, memory and murder. “Only The Desperate Come Here” by Michael Mallory: People only come to attorney Scott Turley when there's no other choice. So when a confessed murderer with deep pockets and a powerful family retains him, he sees it as a big payday … not realizing the extent of the price to him. “The Odds Are Good” by Josh Pachter: When Ginny Krause heads north to escape a bad second marriage, she finds Alaska full of surprises. In “A Grave Mistake” by Rachel Amphlett a walk in the woods takes a dark turn for Ben. In “The Power Of The Dog” by Leone Ciporin a girl wearing a dog costume is performing at a county fair with a kindergarten class, when a gunman rushes the stage. Can her costume help her save the children? “Bone Soup” by Michael Bracken: Sheriff Sherri Fine won her election by mistake, and now she's faced with a cold case that pits her against the local political machine. “A Little Housecleaning” by David Bart: Wade comes to understand the phrase: “The chickens have come home to roost.” “Suicide Insurance” by Gerard J Waggett: The good news: Irish Twins twins Bobby and Ronan hit the lottery. Bad news: Their winning ticket connects them to the murder of a liquor store owner.
Posted by Kevin R. Tipple at 1:00 AM