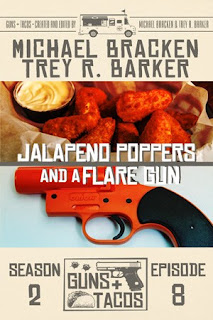 Today is publication day for Jalapeno Poppers and a Flare Gun by Trey R. Barker and SMFS list member Michael Bracken. This is the eighth installment (second season) of their conceived book series, Guns + Tacos. One can pick up the eBook at Down and Out Books where there are additional perks for subscribers to the series, Amazon, and elsewhere.

Carl Ember has just been released from prison and is eager to reunite with Kate Vinson, his former lover and the daughter of his former boss. There’s just one thing preventing him—paperwork stolen from Alderman Sonny Vinson’s safe during a burglary Carl instigated. He has to find it and return it so he can prove his love. Kate Vinson, a Chicago Police Department sergeant, is after the same paperwork because she believes it reveals something about her past that might destroy her career. Her once-powerful father, now battling Alzheimer’s, is no help. Taking separate paths through the Chicago underworld, Carl and Kate find themselves reunited at the home of mobster Sammy the Hat in a showdown that leads to a fiery conclusion.
Posted by Kevin R. Tipple at 1:48 PM