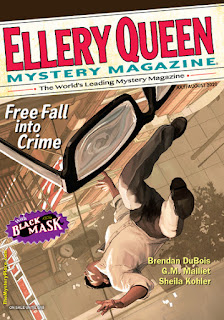 Joeseph Goodrich with “On The Road With Manfred B. Lee: the Same Bloody Imagination.”

Publisher Synopsis:
July/August 2020
The July/August 2020 EQMM has us thinking about the powers that be—the forces that are behind mystery, crime, and everyday life. Robert L. Fish Memorial Award winner E. Gabriel Flores introduces one of these forces, “Mala Suerte” (bad luck), and other characters feel the energy of bad-luck mixups in “The Scourging of Jimmy Blake” by David Dean, “Manic Monday” by Barbara Baraldi, and “Ending It All” by A.J. Wright.
Meanwhile, a young man is unlucky in his choice of part-time job in “The Death and Carnage Boy” by Steve Hockensmith, and bait-and-switch identities affect the outcome of two procedurals: “The Harder They Fall” by John Lantigua and “There Was an Old Woman . . .” by Peter Turnbull.
Sometimes a force seems like magic, but there’s something else behind the trickery, such as in “The Indian Rope Trick” by Tom Mead and two other impossible-crime tales: “The King’s Gambit” by S.A. Cosby, set in an art gallery, and “A Murder at Morehead Mews” by G.M. Malliet, a locked-room murder mystery set at an English manor house. That setting is echoed in an untraditional way in David Bridge’s haunting fiction debut “Feral Flesh.”
The natural world is a powerful entity, as we see in “The Thunderstorm” by Iris Hockaday from the Department of First Stories. And characters take on almost superherolike qualities in “The Recipe Box” by Claire Ortalda, “Mary Poppins Didn’t Have Tattoos” by Stacy Woodson, and “That Which Is True” by Jacqueline Freimor.
Love, whether it’s young lust, a marriage of comfort, or family ties proves powerful in “Midsummer’s Night” by Kevin Egan, “Of Arms and Women I Sing” by Sheila Kohler, and “Rendezvous Time” by Brendan DuBois.
And Joseph Goodrich takes us on another trip of misadventure and luck (or lack thereof) from the lecture notes of Manfred B. Lee, this time outlining the birth of Ellery Queen. We think you’ll be blown away by the force of this compelling fiction!
Posted by Kevin R. Tipple at 2:21 PM
Email ThisBlogThis!Share to TwitterShare to FacebookShare to Pinterest
Labels: Ellery Queen Mystery Magazine: July/August 2020, news, publishing news, SHORT STORIES, SMFS, SMFS Member Publication News, SMFS members