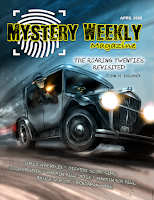 Two SMFS list members have works appearing in Mystery Weekly Magazine: April 2020 issue. The read is available from the publisher in both print and digital formats as well as Amazon and other vendors. The two SMFS members in this issue are:

Josh Pachter with “The Pig Is Committed.”

At the cutting edge of crime fiction, Mystery Weekly Magazine presents original short stories by the world’s best-known and emerging mystery writers. The stories we feature in our monthly issues span every imaginable subgenre, including cozy, police procedural, noir, whodunit, supernatural, hardboiled, humor, and historical mysteries. Evocative writing and a compelling story are the only certainty. Get ready to be surprised, challenged, and entertained--whether you enjoy the style of the Golden Age of mystery (e.g., Agatha Christie, Arthur Conan Doyle), the glorious pulp digests of the early twentieth century (e.g., Dashiell Hammett, Raymond Chandler), or contemporary masters of mystery.

“The Roaring Twenties Revisited” by John H. Dromey: can a mature amateur sleuth go undercover and match wits with an alleged criminal kingpin, or will she only be fooling herself? “The Mystery Of The Egyptian Biscuit” by Jeffery Scott Sims: wheat from an eons old Egyptian Tomb? It was found by the curiously damaged mummy of the sorcerer Artocris. Professor Vorchek seeks the link between the ancient food, the fate of Artocris, and more recent deaths. “Mixed Identities” by Martin Hill Ortiz: when a bleeding stranger breaks into a cabin after midnight, the house-sitter is mistaken for a private eye. No one is who they say they are. “Flashgun” by Bruce W. Most: 1930s tabloid crime photographer Weegee prides himself at being first on a murder scene. But when a big-time gangster is gunned down, he’s shocked to find photographers already there. Discovering why leads to more than a front-page photo. “The Case Of The Disappearing Diamonds” by Benjamin Mark: diamonds have been mysteriously disappearing from their parcels. Blunt and Sharpe have been assigned to discover the methodology use to steal those diamonds. How they do that is the story behind the case. “The Pig Is Committed” by Josh Pachter: to produce a bacon-and-eggs breakfast, the chicken is involved, but the pig is committed … “One Night At Clancy's” by Chris Wheatley: PI Joe Larrone thinks he's got the goods on crime boss Harry Ruddock, but is there another rat in the city smarter than them both? “The Last Mission” by Martin Roy Hill: sometimes what you do in war comes back to haunt you, no matter that you did it for good reasons.
Posted by Kevin R. Tipple at 11:37 AM