SMFS Members Published in The Misadventures of Nero Wolfe: Parodies and Pastiches Featuring the Great Detective of West 35th Street 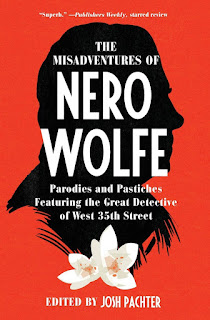 Several SMFS list members have short stories in the new book, The Misadventures of Nero Wolfe: Parodies and Pastiches Featuring the Great Detective of West 35th Street. Edited by SMFS list member Josh Pachter, the book is published by the Mysterious Press. This read is available in print and eBook format from the publisher, Amazon, and other vendors.

Michael Bracken with “The Possibly Last Case of Tiberius Dingo.”

Joseph Goodrich with an excerpt of the first scene of his stage adaptation of Rex Stout’s Might As Well Be Dead.

Josh Pachter with “Sam Buried Caesar” along with the introduction, “Plot It Yourselves.”

If imitation is the sincerest form of flattery, then Nero Wolfe and Archie Goodwin have been widely flattered almost from the moment Rex Stout first wrote about them in 1934. The Misadventures of Nero Wolfe collects two dozen literary tributes to one of crime fiction’s best-loved private detectives and his Man Friday. Included are:
·         A 1947 pastiche by award-winning crime writer Thomas Narcejac
·         Rollicking new stories written especially for this collection by Michael Bracken and Robert Lopresti
·         Stories by bestselling authors including Lawrence Block and Loren D. Estleman
·         Chapters from Robert Goldsborough’s authorized continuation of the Wolfe series; Marion Mainwaring’s 1955 tour de force Murder in Pastiche; and John Lescroart’s Rasputin’s Revenge, which reimagines a young Wolfe as the son of Sherlock Holmes
Also featuring a reminiscence from Rex Stout’s daughter, this is a treasury of witty and suspenseful crime writing for every fan of the portly private detective. 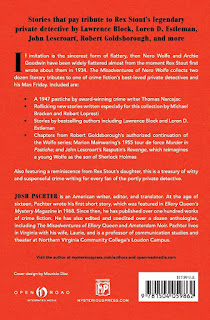 Thanks as always, Kevin, for your dedication to promoting the work of SMFS members!

Just doing my job as I see it, Josh. Thank you.