SMFS Members Published in The Beat of Black Wings: Crime Fiction Inspired by the Songs of Joni Mitchell 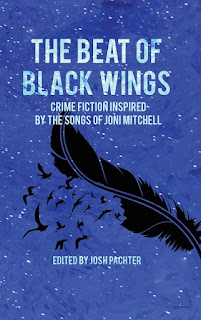 Edited by SMFS list member Josh Pachter, numerous SMFS members are published in the new anthology releasing today titled The Beat of Black Wings: Crime Fiction Inspired by the Songs of Joni Mitchell. Published by Untreed Reads, the book is available in both print and eBook versions at the publisher, Amazon and other vendors. The SMFS members who have reported to the SMFS list their presence in the book are:

Barb Goffman with “Man To Man.”

Tara Laskowski and Art Taylor with “Both Sides, Now.”

Alison McMahan with “Harlem in Havanna.”

Adam Meyer with “The Shades of Scarlett Conquering.”

Josh Pachter with “The Beat of Black Wings.”

Christine Poulson with “The Gallery.”

Art Taylor with Tara Laskowski with “Both Sides, Now.”

1/3 of the author royalties will be donated to the Brain Aneurysm Foundation in Joni Mitchell's name.

With nine Grammys, multiple lifetime achievement awards, inductions into the Rock and Roll Hall of Fame and the Canadian Songwriters Hall of Fame, and a Top Ten ranking on Rolling Stone’s “100 Greatest Songwriters of All Time,” Joni Mitchell has established herself as one of the most important singer/songwriters, not only of her generation, but in the history of popular music.

In this collection, 28 crime writers pay tribute to Joni’s musical legacy with short stories inspired by her lyrics, representing each of her seventeen studio albums from 1968’s Song to a Seagull to 2007’s Shine.

Many of the classics are represented here, including “Both Sides, Now” (in the first literary collaboration between Art Taylor and Tara Laskowski, who have each won major awards for their fiction), “Big Yellow Taxi” (by Kathryn O’Sullivan, author of the Colleen McCabe series), and “River” (by Stacy Woodson, winner of the 2019 Readers Choice Award from Ellery Queen’s Mystery Magazine), plus such equally fascinating titles as “Cold Blue Steel and Sweet Fire” (by Donna Andrews, author of the award-winning Meg Lanslow series), “The Dry Cleaner From Des Moines” (by Amber Sparks), and “Ray’s Dad’s Cadillac” (by Michael Bracken). 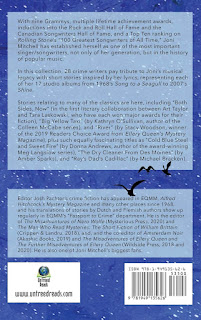 Glad to do. Part of the job as I see things....at least until July 1 when the new team takes over.