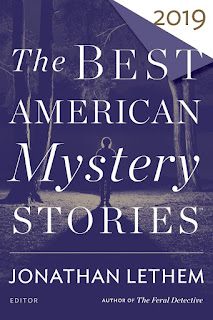 Diana Deverell with “Payback is a Bitch.”

For Jonathan Lethem, “crime stories are deep species gossip.” He writes in his introduction that “they’re fundamentally stories of power, of its exercise, both spontaneous and conspiratorial; stories of impulse and desire, and of the turning of tables.” The Best American Mystery Stories 2019 has its full share of salacious intrigue, guilt, and retribution. The twists and bad decisions pile up when a thief picks the wrong target or a simple scavenger hunt takes a terrible turn. What happens when you befriend a death row inmate, or just how does writing Internet clickbait became a decidedly dangerous occupation? “How can we not hang on their outcomes?” asks Lethem. “Are we innocent ourselves, or complicit?” Read on to find out. 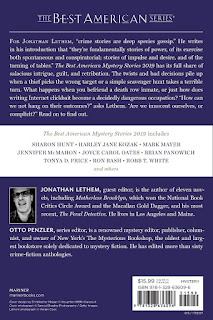 You forgot me: Chris Fortunato, The Boot Scraper. I thought I was a member of SMFS.

Your name does not come up on the SMFS member roll at Groups.Io. Without knowing your personal email address I can't check that. So, as it stands, you are not a member of the SMFS.

Therefore, I did not forget anything at all as the finalized news post reflects the members that were members of the SMFS at the time of posting and had reported their presence in the work.