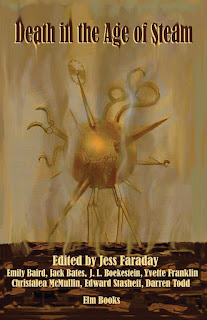 SMFS list member Jack Bates’ short story, “In the Megalodon” appears in the new anthology, Death in the Age of Steam. Published by Elm Books, the anthology is available in print from Amazon as well as in digital format and from the publisher.

Steampunk writing combines imaginative technological tinkering with a 19th century aesthetic. Cheaply done, that means slap some gears on it, call your protagonist 'Lord Crankshaft' or 'Lady Windlass, ' and get it out the door.
But we at Elm Books wanted to dig deeper.
The 19th century was a time of exciting scientific developments: steam power, electricity, refrigeration, and so much more that we take for granted today, but that seemed like witchcraft at the time. But it was also a time of great social inequality and ruthless colonial expansion. It was not the best time, for example, to be female, or poor. And it was a terrible time to be an original inhabitant of a colonized land. And the steampunk genre, like every genre, could do better in representing these stories.
This anthology brings you some of the stories that go beyond the traditional tropes.
Within these pages, you will find lady sharpshooters and dominatrix detectives. You'll encounter vampire forensics, sleuthing Rabbis, and ancient East Asian vendettas exploding onto the streets of East London. And in one spectacular story, one man uncovers a corporate conspiracy to steal the very power of the sun. Perhaps we should have called this anthology Death in the Age of Steam and Sun.

If you thought steampunk was just glued-on gears and fake British accents, you will never be so happy to be proven wrong. In these pages, we’re bringing you the untold stories of steampunk, the Weird West, and beyond. You’ll find clockwork governesses with subversive attitudes, dominatrix detectives and vampire sleuths. You’ll encounter heroic Rabbis, dentists who take a bite out of crime, a ruthless corporations out to steal the sun — and the one man standing in its way. But most of all, you’ll find a fist full of stories and unique, exciting heroes waiting to tell them. Welcome. A lady sharpshooter solves an impossible murder in the Old, Weird West, in A Frame Most Fearful by Emily Baird In The Megalodon by Jack Bates, unlikely heroes foil the attempted sabotage of a magnificent new submersible. In far-off Jerusalem, a determined Rabbi uses logic and Kabbalah to solve a spate of mysterious murders in Beneath the Holy City by Edward Stasheff Mrs. MacAdams’s Establishments by Yvette Franklin has a women respectable by day and dominating by night who investigates a murder with the help of a Lovelace analytical engine. Political intrigue, romantic misunderstandings, and…vampires? In Blood in Peking by JL Boekstein In Honor, Love and Photographs by Christalea McMullin, ancient East Asian rivalries spring to life on the streets of East London. And in Borderman H49 by Darren Todd, a peacekeeper uncovers a twisted plot to cause havoc between competing solar farms and steal the power of the sun. So sit back, strap on your goggles, and get ready for adventure! Jess Faraday is an award-winning author and editor of historical and steampunk fiction. She lives in Scotland. You can check out more her work at http://www.jessfaraday.com 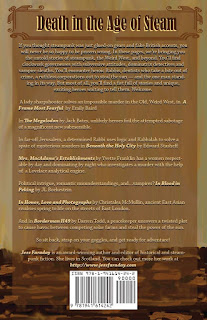