I hope it goes without saying that every writer writes in the way that suits, er, them, as we say in the 21st century, best. But here are a few tips on craft from this writer, who writes two series that include both novels and short crime fiction as well as standalone short stories.

My Bruce Kohler series is a straightforward mystery series. In every case, an amateur sleuth and his two sidekicks address the familiar pattern of crime, investigation, and solution. A novel is too long to proceed in a straight line. Once the investigation starts, complexity must be added: revelations about the victim, unexpected witness and suspects, subplots that may involve the protagonist's personal life rather than the murder. Another murder may lead to further plot twists.

A story of 3,000 to 5,000 words can be more streamlined. I've never found such a space too cramped to set a scene, develop character, and deliver scenes of witty dialogue and emotional intensity. But the plot doesn't have to be extended to sustain the reader's attention, so complications aren't needed. As long as the writing is tight and the pace brisk, one crime, one investigation, and one solution are enough in a traditional detective story. 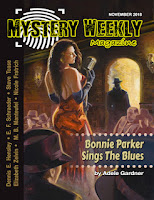 I use the Rule of Three in many of my short stories. I did it by instinct first and named it afterwards, when I realized it worked from story to story and in a variety of forms. The first time, my protagonist Bruce makes the mistake of letting a charming but feckless Australian sleep on his sofa. The Australian brings a different woman home with him every night until the morning Bruce finds him dead on the sofa. The women who participated in the victim's one-night stands are obvious suspects. But how many? And how about clues? I had Bruce find small items the Australian left in the pockets of a sweatshirt—Bruce’s sweatshirt.

One, two, three. Three clues, three suspects to investigate. Just right, like the porridge in Baby Bear's bowl, his chair, and the bed where the three bears found Goldilocks sleeping. In fact—and I say this with pure hindsight—look at fairytales and folk tales, and we see that three has always been the magic number, the number that makes a story work.

In a standalone story I wrote a few years later, I used the Rule of Three in a different way. I set myself the challenging task of blending several disparate elements. The setting is Queens, the second least interesting borough of New York City. It’s a story of domestic violence and betrayal. It’s the coming of age story of the protagonist, a twelve-year-old boy. And the backdrop is a true story that has always haunted me, the execution of the Rosenbergs, leaving their children—New York Jewish kids my age—orphans.

In the first draft of my story, the protagonist is approached by a mysterious man whom most readers will identify as an FBI agent. The man asks questions about the boy's parents' political activities, and the boy responds because he is angry at his father. When I reread the draft, I realized it lacked tension. So I applied the Rule of Three. In the revised version, the agent approaches the boy three times. I made sure the second encounter had more emotional impact than the first. And the third time, after a violent scene at home, the boy succumbs.

In detective fiction, one advantage of short stories over novels is that not every procedural detail must be included. The writer can leave out what Elmore Leonard called "the parts that readers tend to skip." You don't have to study maps of the town where you set your scene or email your cop friends to be sure you've used the right caliber ammunition in the handgun found near the body. You can even get away with not explaining how the investigators get from the moment of revelation to the arrest. In my first Bruce story, Bruce's Proustian moment is the smell of garlic—and in the next sentence, the cops are knocking on the killer's door.

In a novel, I'd have had to write a believable scene in which Bruce convinces the police his reasoning is correct and gives them probable cause to search the suspect's apartment. In a short story, it doesn't matter, as long as you end with a bang. The bang can be supplied by either the hallowed "twist at the end" that everyone knows a short story requires or, just as good, in my opinion, a cracking good punch line. In a twist, the action or deduction takes a clever turn. In a punch line, either the narrative or a character delivers a zinger. This may be done with language, or twist and punch line may be combined in the sudden revelation of some new aspect of character. The example that comes to mind is the end of the movie Some Like It Hot: "I'm a man!" "Well, nobody's perfect." The only real criterion is that it leaves the reader gasping.


Elizabeth Zelvin is the author of the Bruce Kohler Mysteries and the Mendoza Family Saga. Her short stories have been nominated three times each for the Derringer and Agatha awards and have appeared in Ellery Queen's Mystery Magazine and Alfred Hitchcock's Mystery Magazine, among others. She has edited two anthologies: Me Too Short Stories: An Anthology and Where Crime Never Sleeps: Murder New York Style 4. Visit her author website at http://elizabethzelvin.com.
Posted by Kevin R. Tipple at 1:00 AM
Email ThisBlogThis!Share to TwitterShare to FacebookShare to Pinterest
Labels: crime fiction, Elizabeth Zelvin, Guest post, How A Novelist Writes Short Crime Fiction, Me Too Short Stories: An Anthology, mysteries, SHORT STORIES, SMFS, SMFS Member, writing

Thanks for having me on the blog again, Kevin. I'm always surprised when a mystery novelist whose work I admire says, "I don't write short stories," or even, "I don't know how." I'd be very happy if this post helps change that for even one author.

Everything you said makes sense, Elizabeth. In my next story, I'll count to see if it follows the Rule of Three.

Excellent post, Liz. I'll remember this and use it from now on.

Even I can count to three. Thank you Elizabeth!