SMFS Members Published in The Desperate And The Damned: A Toe Six Anthology 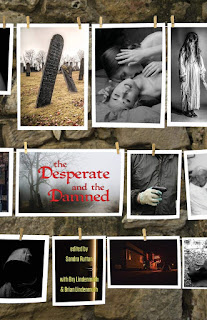 Several SMFS members have short stories in the new book, The Desperate And The Damned: A Toe Six Anthology. Edited by SMFS member Sandra Ruttan and Brian Lindermuth, the read is available in both print and digital formats from Amazon and other vendors. The SMFS members in the book are:

Tracy Falenwolfe with “A Mother’s Love.”

Thomas Pluck with “Two To Tango.”

Travis Richardson with “I’ll Be You.”

A naughty old woman. A girl locked away. Men desperate for money. The people caught in the crossfire of other people’s lives as they implode. The Desperate and the Damned contains 14 stories that look at both sides of crime. There are the criminals, desperate for money or revenge or driven by their own desires. There are the victims, who suffer at the hands of others. Some get revenge, some get justice and some elude suspicion from anyone willing to take action. Others are damned from the first word, the ones who never could catch a break no matter how hard they tried. Justice is both served and denied throughout these pages, much as it is in real life.

Whether it’s a naughty grandma heading out to find a guy to bring home to satisfy her desires, a mother struggling with mental illness, a guy about to lose his job who doesn’t know how he’ll pay the bills, each character is living on the edge of their existence, forced to extreme measures to right wrongs or survive.

The only question is will they?