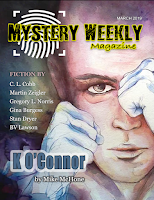 Two SMFS list members are published in the Mystery Weekly Magazine: March 2019. The read is available in print and digital formats from the publisher as well as Amazon. The two members in this issue are:

BV Lawson with “A Flash of Red.”

Jeanna Weart with a “Flap Over A Ring” which is “A-You-Solve-It” mystery. The answer will be in the next issue.

At the cutting edge of crime fiction, Mystery Weekly Magazine presents original short stories by the world’s best-known and emerging mystery writers.  The stories we feature in our monthly issues span every imaginable subgenre, including cozy, police procedural, noir, whodunit, supernatural, hardboiled, humor, and historical mysteries. Evocative writing and a compelling story are the only certainty. Get ready to be surprised, challenged, and entertained--whether you enjoy the style of the Golden Age of mystery (e.g., Agatha Christie, Arthur Conan Doyle), the glorious pulp digests of the early twentieth century (e.g., Dashiell Hammett, Raymond Chandler), or contemporary masters of mystery. In our cover feature story, “K O’Connor” by Mike McHone, a once-adored professional boxer shows up dead and it's up to detectives Molly Fetterly and Jim Biggins to find the killer, but they'll soon realize the killer was closer to the victim then they could've initially imagined. “A Case Of Southern Discomfort” by C. L. Cobb brings a New York transplant to Southern climes where he finds bad news can happen when things go South. “Let's Talk Toxins” by Martin Zeigler is a witty mystery that begins when Etta turns to Otto in bed and tells him she poisoned his dinner. Otto, who enjoys a good joke as much as anyone, decides to play along. “The Truth Of The Matter” by Gina Burgess crosses into the supernatural after the death of the town engraver. His son and daughter-in-law receive mysterious, engraved messages suggesting someone in town has a secret. Gregory L. Norris presents “Antiques”, a suspenseful caper involving an aging actress who vanishes on the day of her 100th birthday. In “Finishing Off Gammie” by Stan Dryer, Harry Fredder decides to kill his mother-in-law. Things don't go exactly as planned as Gammie turns out to be a lot more resourceful than he thought and soon the tables turn. In “A Flash Of Red” by BV Lawson, a mysterious selfie, the murder of a college student, and attacks on homeless people weren’t exactly the Christmas presents crime consultant Scott Drayco had in mind.
Posted by Kevin R. Tipple at 12:33 PM