SMFS Members Published in Murder-A-Go-Go's: Crime Fiction Inspired by the Music of The Go-Go's 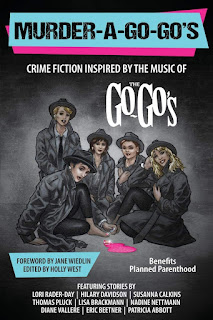 Several members have been published in the new anthology, Murder-A-Go-Go's: Crime Fiction Inspired by the Music of The Go-Go's. Published by Down & Out Books, the read is available in print or digital formats from the publisher, Amazon, and other vendors. The SMFS members in the anthology are:

Eric Beetner with “Skidmarks On My Heart.”

Stephen Buehler with “Girl Of 100 Lists.”

Jen Conley with “Good for Gone.”

Thomas Pluck with “We Got The Beat.”

Travis Richardson with “Johnny Are You Queer?” 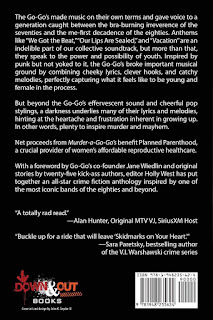 The Go-Go's made music on their own terms and gave voice to a generation caught between the bra-burning irreverence of the seventies and the me-first decadence of the eighties. Anthems like "We Got the Beat," "Our Lips Are Sealed," and "Vacation" are an indelible part of our collective soundtrack, but more than that, they speak to the power and possibility of youth. Inspired by punk but not yoked to it, the Go-Go's broke important musical ground by combining cheeky lyrics, clever hooks, and catchy melodies, perfectly capturing what it feels like to be young and female in the process.

But beyond the Go-Go's effervescent sound and cheerful pop stylings, a darkness underlies many of their lyrics and melodies, hinting at the heartache and frustration inherent in growing up. In other words, plenty to inspire murder and mayhem.

With a foreword by Go-Go's co-founder Jane Wiedlin and original stories by 25 kick-ass authors, editor Holly West has put together an all-star crime fiction anthology inspired by one of the most iconic bands of the eighties and beyond.
Posted by Kevin R. Tipple at 2:08 PM