Guest Post: ME AND MY SHADOW WITH A LITTLE BIT ABOUT WRITING by Margaret Mendel

ME AND MY SHADOW WITH A LITTLE BIT ABOUT WRITING

Jenny had been sitting at the computer for hours. The story was not flowing. There was an ending and the introduction started the short story off with a bang. It was the danged middle that was giving Jenny trouble. That section was dull, rambling and Jenny was nowhere near figuring out what to do with it.
Shadow, a scruffy rescue dog, sat patiently on the floor next to Jenny with his nose under the desk. The writing had been going so badly these days that Jenny no longer felt comfortable taking the time out to walk poor old Shadow. So Jenny paid a dog walker to scuttle the dog up and down the city streets making sure he did his thing at least twice a day while Jenny’s battle raged on with the middle of the story.
The sun had been down for hours. The couple that lived in the adjoining apartment had come home from work. The smells from their dinner usually drifted under Jenny’s door late in the evening and lingered until she went to bed. Tonight they had fish, not Jenny’s most favorite odor.
Jenny reached for her cigarettes. The cellophane pack made a crinkling sound as she lifted it. Jenny knew it was nearly empty earlier in the evening. Hopefully one cigarette remained. She was wrong. The pack was empty. Angry with herself, angry at her story, angry at the smell of fried fish, Jenny quickly stood up. Most of the day had been spent sitting at the desk staring at the computer screen. Until then she felt nothing but the cushion of the chair against her bottom. Now standing, her body ached all over. Her knees were stiff. Her neck had a crook in it. Stretching backward to loosen her hips, Jenny looked down at Shadow. “And this is all in the name of writing,” she said. 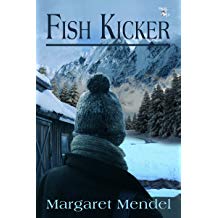 Grabbing her keys, slipping on a pair of shoes, Jenny put a leash on Shadow and they walked down the four flights of stairs. Opening the front door a cool damp breeze gently brushed against Jenny’s face. She took a deep breath, turned left and headed toward the all-night deli several blocks away. The streetlights gave an illusion of security as yellowish neon puddles of light dotted the sidewalk.
Once inside the deli, still a bit dazed from lack of companionship, the absense of fresh air and of being locked in the squishy middle of her short story for who knows how many days, Jenny paid no attention to what was going on in the store. Then slightly recovering from her self induced isolation, she saw three young men gathered near the counter. Jenny looked at the clerk. He glanced back and forth between Jenny and the men. The clerk’s hands trembled. Then Jenny saw that one of the men was holding a gun. It was nearly covered over by the man’s jacket, but the guns shiny muzzle poked out just enough to be seen.
Holding tightly to Shadow’s leash, Jenny had no idea what to do next.
“What you looking at lady?” one of the men said to Jenny.
“Nothing,” Jenny replied.
The guy with the gun eased closer to the counter and said, “Good, cause nosey people usually get into trouble.” He looked at the clerk, “Now where were we? Oh, yes, our transaction.”
Shadow growled. Jenny had never seen her dog behave this way. The dog pulled at his leash, crouching as he eased toward the three men. The dog bared his teeth. His bark, usually within the range of a normal dog barking, now sounded mean and dangerous, as though the dog had somehow been transformed into a wild beast. The dog lunged and sank his teeth into one of the men, ripping into the pant leg. Shadow grabbed at the man again, his sharp teeth tore into the guy’s flesh. The man cried out. The other thief kicked at Shadow. The dog attacked him and with a fierce growl he clamped his strong jaws onto the flailing hand of the confused robber. 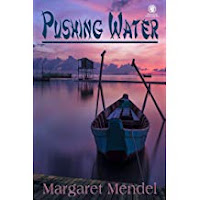 The once confident thieves dripped large puddles of blood on the tile floor. The man with the gun took aim at the barking dog. But before he could manage a shot, the clerk cracked the robber over the head with a baseball bat. The thief fell to the floor and the clerk wasted no time in dialing 911.
With a baseball bat in one hand and a cell phone in the other, the clerk said to the robbers, “You make a move for the door, and I’ll send your heads out into left field.”
The bleeding thieves cowered while Shadow continued to bark.
It didn’t take long for a patrol car to arrive and the thieves were taken away.
Jenny purchased her cigarettes and a candy bar, but the clerk refused to take any money and gave her a bag of dog treats.
Jenny and Shadow wasted no time walking home. Jenny’s heart beat faster than she ever remembered. Her breathing was deep and labored as she quickly ascended the stairs to her fourth floor apartment.
Unlocking the door she wasted no time closing and bolting it behind her. Collapsing onto an easy chair in her living room, Jenny tried to calm her body. The pulse beat wildly in her neck. Slowly as the minutes ticked by, Jenny could feel herself relax. Shadow lay next to her on the floor. A few dribbles of dried blood dotted the top of the dog’s head. Jenny reached down and petted Shadow gently on the rump.
In all the excitement Jenny forgot about the squishy middle of her short story and instead wondered what had prompted Shadow to behave as he did. After about a half hour or more of calming herself, it came to her. Not why Shadow had acted as he did, but how that troublesome middle of the story could be fixed.
“I got it,” Jenny shouted.
Shadow jerked up his head. He yawned widely.
Jenny rushed over to the computer, “I got it, Shadow! I know how to fix the middle.”
The dog slowly got up, positioned himself at Jenny’s feet with his nose in a favorite spot just under the desk.
#
Here are some tips for when you are ‘stuck’.
1.      Go for a walk.
2.      Do something physical to increase your heart rate.
3.      Walk a dog, your dog or a neighbor’s dog.
4.      Jump up and down.
5.       Watch a really scary movie.
6.      Do something to distract your self from the every-day mundane loop in the thinking process.
Then relax and open up to new possibilities.
Margaret Mendel ©2019 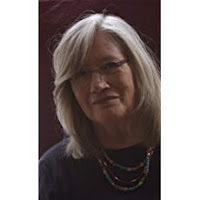 Margaret Mendel lives in New York City and is a past board member of Mystery Writers of America and Sisters in Crime, NYC. Margaret is an award- winning author who has an MFA in creative writing from Sarah Lawrence College. She has published two novels, Fish Kicker and Pushing Water and her most recent publication, Patches, is a collection of short stories. For more than twenty years Margaret worked in the mental health field, though now she is a full time author. Photography is also an import part of her life and Margaret not only drags a laptop, but a Nikon D7000 camera wherever she goes. Lean more about Margaret on her website at: http://www.pushingtime.com/home/
Posted by Kevin R. Tipple at 1:00 AM

Nicely done, Marge!
SJ Rozan once gave this bit of advice: Whenever you get stuck, have a man with a gun walk into the room.

Great story - so true about writing and the "miracle author" Shadow! Thanks for sharing.

Neat story, Margaret, and some great advice. I don't have a dog and I don't want to confront crooks, but when I'm stuck and the right words don't come, I'll sometimes play Free Cell.