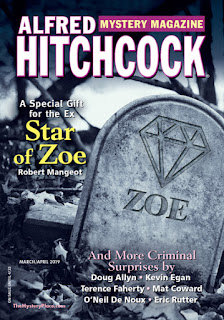 Several SMFS list members have stories in the Alfred Hitchcock Mystery Magazine: March/April 2019 issue. They are:

Kevin Egan with “The Courthouse Paperboy.”

Terrence Faherty with “Margo and the Red Carnation.”

Robert Mangeot with “Star of Zoe.”

William Burton McCormick with “Murder in the Second Act.”

O’Neil De Noux with “The Peeschwet.”

Courting Danger
Love and passion are often the beating heart of enthralling crime stories. Tales from the flip side of the Valentine’s Day card in our latest issue careen from crashing a wedding to crashing a funeral, from fleeing an abusive partner to ensuring that one’s love will never (completely) die. Herein are thirteen stories of love, loss, and legally questionable choices for those passionate about crime fiction and short stories.
A young banker’s life is upended when he is jailed for embezzlement, but he gets out just in time to wreak havoc as “The Wedding Crasher” in a new tale by Doug Allyn. A master thief, meanwhile, tries crashing the funeral of his beloved ex-wife in Robert Mangeot’s “Star of Zoe.” And O’Neil De Noux’s New Orleans P.I. Lucien Caye takes on the case of a hapless ex-con whose ex-wife won’t allow visitations with his son in “The Peeschwet.”
Amanda Witt’s tale of a young mother’s desperation to escape an abusive relationship is taut and tense in “Up in the Air.” Franz Margitza’s “Eulalia” is a nod to Edgar Allan Poe, with its dark theme of measures taken to hold on to one’s love. Eric Rutter’s “Mrs. Carter” recounts a wife’s heartbreak when Pinkerton detectives show up to arrest her husband.
In “Louisa and the Tunnel” by Marianne Wilski Strong, a Cape May resident’s love of Louisa May Alcott stories helps her understand why a wealthy woman won’t allow historians on her property to research the Underground Railroad. A cleaning lady working late at night at a courthouse hears the painful wail of a departed spirit (she thinks) in Cheryl Skupa’s “Ghost in the Nemaha County Courthouse.”
Radio producer Margo Banning is pressed into service to help catch a German spy in Terence Faherty’s WWII-era “Margo and the Red Carnation.” In William Burton McCormick’s “Murder in the Second Act,” two sisters solve a crime set around a traveling theater troupe. Kevin Egan’s savvy courthouse security officer, Foxx, aids a fellow worker and gets involved in a consumer credit case in “The Courthouse Paperboy.” And Mat Coward returns with a tale that begins with a menacing note sent to a practical joker in “What Invisible Means.” Finally, the buck stops with Mark Milstein’s fast-food restaurant manager when an electrical outage cascades into a series of unfortunate events in “A Curious Transaction.”
Joining us this issue is Laurel Flores Fantauzzo stepping in as our new book reviewer. Laurel is an assistant professor in the English Department at the University of Hawaii at Mānoa and the author of the acclaimed nonfiction mystery The First Impulse.
Once again, we’re pleased to present a bouquet of thirteen tales featuring characters we think you’ll fall in love with.
Get your copy now!
FICTION
What Invisible Means
by Mat Coward
Tuesday was a great day. Wednesday less so, of course, because that was when he got the letter saying that someone was planning to murder him, but Tuesday went better than Des could have hoped. The whole business with the open-top bus had started as a throwaway gag, and ended as just about the funniest thing he’d ever been involved in. He woke up the next morning with ribs sore from all the laughing and a slightly acid stomach from all the champagne. He made his breakfast, had a shower, and then he opened the post. Apart from the thing saying he was going to be murdered, it was mostly junk.
“The good news,” said Detective Constable Vicki, “is that this is not a real Osman warning. It’s definitely a fake.”
“Okay,” said Des. “On the one hand, great, phew, you’ve put my mind at rest, et cetera. On the other hand, I don’t know what an Osmond Warning is.” READ MORE

The Courthouse Paperboy
by Kevin Egan
It was such a thin line, Foxx realized later, the difference between him being there and not. He might have banged in sick. He might have been assigned to a trial. The officer posted at the security desk might have been feeling well enough that she didn’t need to take a break. But Foxx came to the courthouse that day. The captain did not pull him from his usual duties of circulating throughout the building. And it was that time of the month.
The fifth floor security desk was one of several choke points around the courthouse. It stood at the head of a small lobby that was the only public access to the twelve judicial chambers strung out along the corridor that followed the building’s hexagonal outer wall. The desk was a potentially crucial security post that rarely lived up to its potential.  READ MORE
DEPARTMENTS
Booked & Printed
by Laurel Flores Fantauzzo
In the late 2000s, Linda Landrigan hired me as the Assistant Editor at AHMM, and my education in mystery and publishing began. Robert Hahn’s reviews brought me reflections about trends, foibles, and achievements in new books of the genre. I was always curious what insights and wisdoms his columns would bring.
I’m honored that, ten years later, after writing a debut true crime book of my own, I’m stepping into Mr. Hahn’s formidable space in the magazine. I hope that with my own reviews I can continue to honor the work he did here, and bring AHMM readers into the worlds of new books still to come. READ MORE

Mysterious Photograph
We give a prize of $25 to the person who invents the best mystery story (in 250 words or less, and be sure to include a crime) based on the photograph provided in each issue. The story will be printed in a future issue. READ THE MOST RECENT WINNING STORY.

Dying Words
Acrostic puzzle by Arlene Fisher
Solve the clues to reveal an interesting observation about an author and their work! Shh! The solution to the puzzle will appear in the next issue. CURRENT ISSUE'S PUZZLE

Mixed-Up Sidekicks
by Mark Lagasse
Unscramble the letters of each numbered entry to spell the name of a famous sleuth.  MOST RECENT PUZZLE