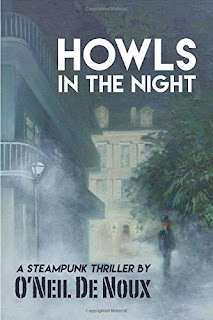 SMFS list member O'Neil De Noux’s latest book, Howls In the Night is now out. The book is the second in his Jacques Dugas Mysteries series. The “steampunk thriller” is available in print and hardback formats at Amazon.

A New Orleans historical mystery steampunk thriller set in 1900. Howls reverberate off lacework balconies along fog-shrouded streets of the old quarter as New Orleans Police detectives search for missing men. The howling continues as the mutilated bodies of the missing are discovered. At night, terrorized people huddle behind barred doors in the French Quarter. The superstitious think the killer is a werewolf. Is the work of this maniac connected to the sudden, nearly uncontrollable lust overwhelming several pretty women involved in the case, including Detective Jacques Dugas’s darling Evelyn? A deadly game of sex and violence plays out as police search for a gruesome murderer. NOPD must work in the unfriendly Old French Quarter, now an Italian enclave. Sicilians and Napolitanos and other Italians distrust the police even when the police work in their interest. It does not help that NOPD is predominately Irish. French-American Detective Jacques Dugas, an exception and an exceptional detective leads the investigation as the bodies are discovered. Two women are quickly involved in the drama, both Corsican-American. Donatella Saliceti is found lying unconscious on the banquette (sidewalk in New Orleans) on the evening of one of the murders. She is somehow connected to this but her connection is illusive. The other woman is Evelyn Dominici, Dugas’s lover, a beautiful, intelligent woman, living in an uptown mansion on Audubon Park. Her bright mind immediately questions if the mutilation are cannibalistic. When the howling comes to Audubon Park, Dugas chases what many believe to be a werewolf preying on New Orleanians. How can ordinary police battle the supernatural? Could these killings be a sacrifice to the psychopompos – the ‘spirit who escorts newly deceased to the afterlife? This book follows THE FRENCH DETECTIVE in the series. 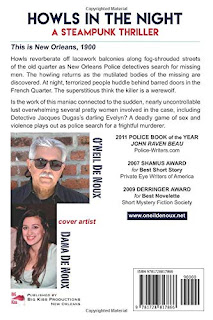 In 1900, the crumbling French Quarter is an enclave of immigrants, primarily Sicilian. Early one July evening, four year old Luigi Bova is lured from in front of his house by the promise of ice-cream by a man who tosses Luigi into the back of a passing wagon. A frantic search ensues but Sicilians are reluctant to call the New Orleans Police Department populated by mostly Irishmen. Detective Jacques Dugas, taking a short cut through the Quarter, comes upon a street full of people looking for the missing boy and takes command of the situation. An immediate search for the boy fails to locate Luigi or any leads and Det. Dugas begins a long, painstaking investigation among people who had no use for the police, people who speak a different language, people with their own way of dealing with crime. Assaulted from all sides, Dugas assembles a team of detectives, street cops, reluctant-but-sympathetic Italians and a strikingly-pretty woman, part Corsican, part English, who happens to be an expert linguist with a gift of getting Sicilians to talk. They are soon pitted against formidable villains including a crime boss known as il Maiale (the hog) and a terrifying henchman whose skeletal visage and cold black eyes have earned him the nickname il Cadavere (the cadaver). From the crowded French Quarter, across sprawling turn-of-the-century New Orleans, to the wilds of Algiers across the river, detectives follow false lead after false lead, as bogus ransom notes arrive almost daily, until Dugas finds a street urchin, another little boy who saw who took Luigi. With the blood-feud between Irish and Italians ready to rekindle – ten years earlier the first NOPD chief of police was murdered by the Mafia – with growing unrest in the black community as the south begins to implement the hated Jim Crow Laws – with few allies – it takes an American with a French surname to remained focused on one mission. Find Luigi Bova.