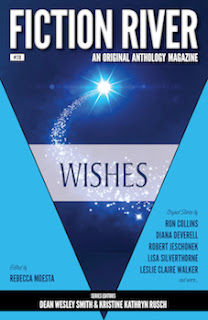 Four SMFS members appear in the just released WISHES issue of  Fiction River: An Original Anthology Magazine. The issue (number 28) is available in digital format with the paper format coming soon from  WMG Publishing  as well as Amazon and other vendors.

The published members are:

Forget the old adage that cautions against wishing. The sixteen stories in this latest Fiction River contain just the right amount of heart, magic, pathos, and even hope. From a daughter hoping to save her father with a crash-course in wishery to an unfortunate victim at the wrong end of someone else’s wish, these stories show teens trying to wish away their problems—with often unexpected results. But no matter the dilemma, this volume of Fiction River promises to lift your spirits and remind you just how much magic the universe offers.